On Nov. 26, 2020, following the recent British Columbia general election, Premier John Horgan announced the new provincial Cabinet.  Katrine Conroy became B.C.’s first female Minister of Forests, Lands, Natural Resource Operations and Rural Development.  She will also return to her role as Minister Responsible for the Columbia Basin Trust, Columbia Power Corporation and the Columbia River Treaty.  Prior to the election, Conroy had been Minister of “All Things Columbia” since 2017 and, before that, had served for a number of years as Official Opposition critic for Columbia Power Corporation, Columbia Basin Trust and the Columbia River Treaty.

“Returning to this role is a great honour for me,” said Conroy.  “As a long-time Columbia Basin resident, I know how important the Treaty is to the people of this region.  As negotiations with the United States continue, this is a critical time.  I look forward to being part of our efforts to ensure we have a Treaty that benefits Basin communities and reflects their needs and their feedback.” 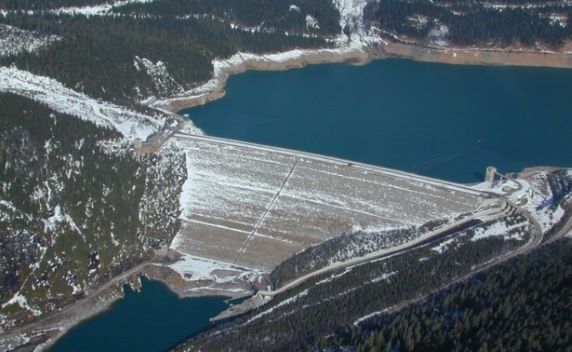 On June 29 and 30, 2020, negotiators representing Canada and the United States reconvened for the tenth round of talks regarding the future of the Columbia River Treaty.  Due to COVID-19, this round of negotiations was held virtually.

During this session, the Canadian negotiating team tabled a proposal for a modernized Treaty.  The proposal, developed collaboratively by Canada, B.C. and Columbia Basin Indigenous Nations, came in response to a framework that U.S. negotiators tabled during the previous round of discussions in March.

The comprehensive Canadian proposal outlined a framework for a future agreement and covered the range of issues that have been discussed since negotiations began in 2018, such as flood-risk management, power generation, ecosystem function, Libby dam coordination and increased flexibility for Canadian operations.  The proposal drew on input that negotiators have received over the years from a wide range of voices in the Columbia Basin, including those of Indigenous Nations, the Columbia River Treaty Local Governments’ Committee, the Columbia Basin Regional Advisory Committee, and residents who have attended the Province’s many Columbia River Treaty community meetings since 2012.  The proposal also reflects Canada’s expectations that, to be successful, a modernized Treaty must be mutually beneficial to both Canada and the U.S. 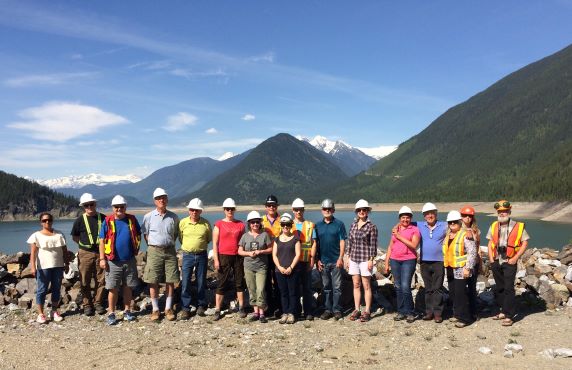 Although COVID-19 has presented challenges for many groups that traditionally gather in person, the Columbia Basin Regional Advisory Committee (CBRAC) has forged on, continuing its efforts to help inform potential future improvements to the Columbia River Treaty and hydroelectric operations in the Columbia Basin.

CBRAC had been meeting twice a year in various locations throughout the Columbia Basin since it was formed in 2014.  This past spring, the committee was set to meet for the first time in Valemount, B.C., before travel restrictions put a hold on those plans.  Undeterred, the committee has stayed connected, shifting its discussions online.

Since March, the advisory group has come together for six virtual sessions.  Members received updates after each of the most recent rounds of Canada-U.S. Treaty negotiations (Round 9 was held in March and Round 10 in June).  As has been common practice since the transboundary discussions began in 2018, Sylvain Fabi, Canada’s Chief Negotiator for the Treaty, and Kathy Eichenberger, B.C.’s lead negotiator on the Canadian negotiating team, delivered the updates and answered questions.  Sylvain expressed gratitude for still being able to connect with CBRAC as negotiations progress and is looking forward to when he can to return to the Basin and meet with this group again in person. 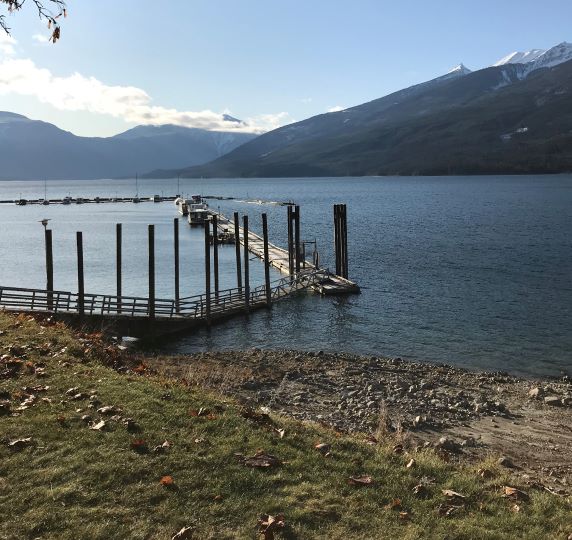 In mid-July, 300 feet of the Nakusp marina’s west breakwater was replaced, the first phase of a larger project to improve this structure that protects the marina and boat ramp.  The work was finished on budget and on schedule, with funding from the Village of Nakusp ($200,000), BC Hydro ($100,000) and the Province’s Columbia River Treaty Branch ($30,000).

BC Hydro built the marina and breakwater in the early 1980s and later sold it to the Village for one dollar.  It was intended to last 25 years and, 38 years later, had fallen into considerable disrepair.  In 2013, BC Hydro gave the Village a $100,000 grant to refurbish the breakwater; however, the cost of the work proved more expensive than expected, so the refurbishment wasn’t done at that time.

The B.C. Treaty Team’s support for the project comes as a result of its efforts to address Columbia Basin community concerns related to the Columbia River Treaty.  Although Canada and the U.S. are currently engaged in discussions about modernizing the Treaty, some local concerns related to the Treaty can be addressed outside of this process.  Following a discussion about the Nakusp marina and breakwater during a community meeting the Province hosted in Nakusp in 2019, and a meeting with Mayor Zeleznik and Village staff the next morning, the Province explored various avenues of potential support for the project.  In March 2020, provincial funding was allocated to the Village of Nakusp to undertake an engineering assessment and preliminary work for their proposed west breakwater replacement project. 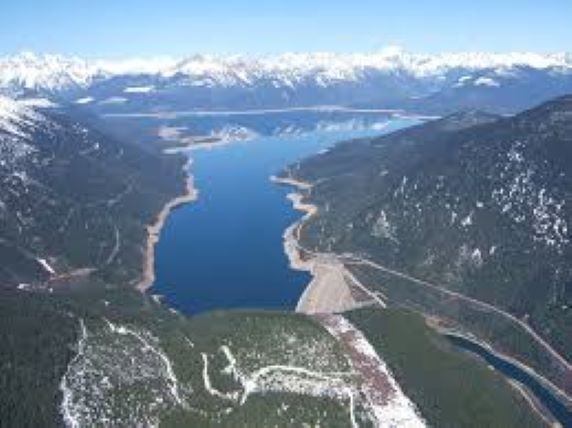 For several years, Columbia Basin Indigenous Nations have been leading efforts to explore how to enhance Columbia Basin ecosystems.  This work is actively informing the Canadian negotiating team’s options for how to address ecosystems in a modernized Columbia River Treaty.  During presentations at the Province’s 2019 community meetings, Basin residents raised concerns that there may be gaps in the scientific data needed to support these efforts, and asked what steps are being taken to obtain some of the missing information.

The Province of B.C. has since used aerial imagery of Arrow and Kinbasket reservoirs, supplied by BC Hydro, to develop geospatial mapping products of both reservoirs.  Geospatial mapping is different from traditional mapping because it uses digital data to generate a custom map for a particular purpose.

The aerial imagery was used to create digital elevation models, which are computer generated 3D representations of the terrain along each reservoir.  The models were finalized in May 2020 and have been shared with the Indigenous Nations-led Ecosystem Function sub-committee to support its research. 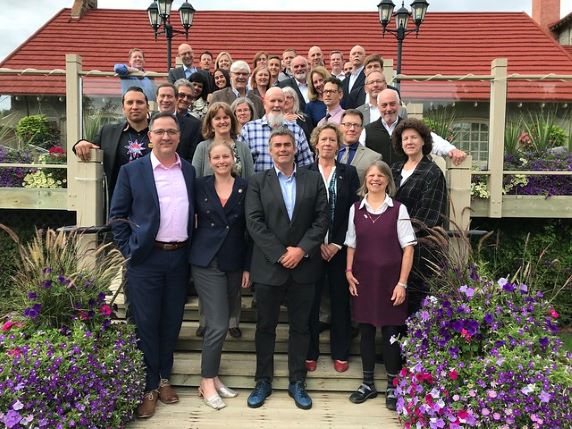 Treaty Fact: Who is part of the Canadian Columbia River Treaty Negotiation Delegation?

Global Affairs Canada:  is responsible for transboundary treaties and leads the Columbia River Treaty negotiations.  The federal government supported British Columbia's lead precedural role in the 2012-2014 Treaty Review; however, each government will have its own decision-making process prior to an agreement being reached with the U.S.

The Province of B.C.:  represents the interests of British Columbians.  The Canadian-British Columbia Agreement (1963) transferred most Treaty benefits and obligations to the Province.  Although this agreement retains Canada's constitutional jurisdiction for international treaties, it requires Canada to obtain agreement of the Province before terminating or amending the Treaty.

Columbia Basin Indigenous Nations:  On April 24, 2019, the Honourable Chrystia Freeland, then Minister of Foreign Affairs of Canada, announced that representatives of the Ktunaxa, Secwepemc, and Syilx/Okanagan Nations would participate as observers at the Canada-U.S. Columbia River Treaty negotiations.  Since then, representatives of the Ktunaxa, Secwepemc, and Syilx/Okanagan Nations have been present in the ngotiating room and full participants in caucus meetings with Canada and B.C. during negotiating sessions.  The Indigenous Nations are also partners with Canada and B.C. in developing negotiations positions and proposals, in preparatory meetings before each round of negotiations, and in debfrief meetings after each round.