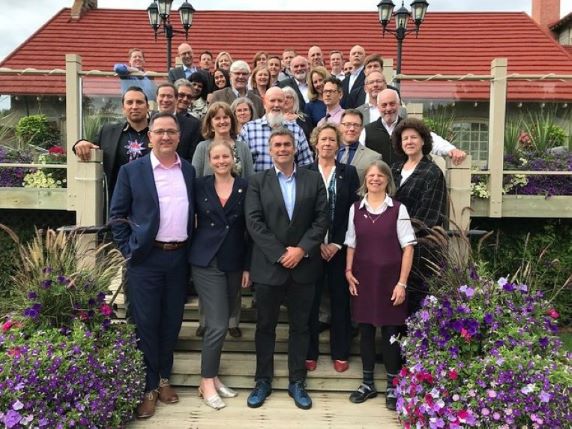 Canadian and U.S. negotiating teams, Canadian Indigenous Nations observers and representatives of U.S. Tribes, Round 8 in ?aq’am, near Cranbrook, B.C. on Sept. 10 and 11, 2019

Canadian and American negotiators met in ?aq’am, near Cranbrook, B.C., on Sept. 10 and 11, 2019, for the eighth round of discussions about the future of the Columbia River Treaty.

During the meetings, Canadian Indigenous Nations observers from the Ktunaxa, Secwepemc and Syilx/Okanagan Nations made two presentations on behalf of Canada, drawn from their ongoing study of ecosystems in the Canadian Columbia Basin that are affected by the Treaty, and the work they are leading to assess the feasibility of reintroducing salmon to the upper Columbia River.

The U.S. negotiators were joined at this round by advisors from U.S. Tribes, who provided their expertise regarding ecosystem work undertaken in the Basin, including transboundary efforts.

Katrine Conroy, B.C.’s Minister Responsible for the Columbia River Treaty, said, “The approach being taken by negotiators shows just how far we have come since the Treaty was drafted more than half a century ago.  The presence and involvement of Canadian Indigenous Nations and the U.S. Tribes means voices and perspectives that were shut out over 50 years ago are now being heard and are helping to shape the Treaty’s future.” 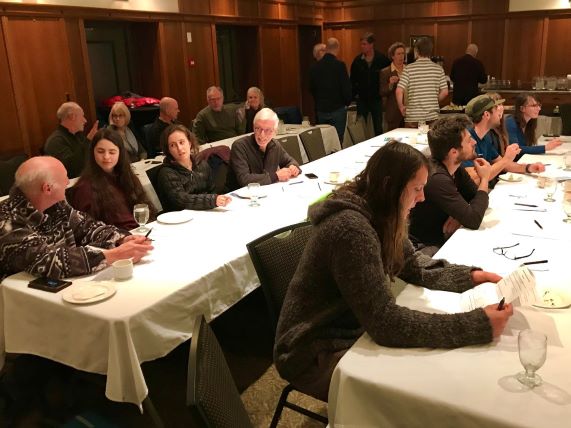 In a follow-up to the community meetings held throughout the B.C. Columbia Basin in 2018, the B.C. government hosted a further 12 sessions in October and November 2019.   These sessions served to update residents about the current Canada-U.S. Columbia River Treaty negotiations, and work being done to address some of the key interests that have been raised by Basin residents since the Province started to review the Treaty in 2012.

The meetings drew over 300 people, many who have been following the Treaty for years, and others who were new to the Treaty and wanted to learn.  There were more young people in attendance than have been at previous meetings, bringing fresh perspectives and sharp questions.  A welcomed shift, as Treaty veterans have been expressing the need for more youth involvement to continue stewardship of the Basin for years to come.

The Columbia River Treaty Local Governments’ Committee began each meeting by sharing how they have been raising Treaty issues with their counterparts across the Basin.  They also presented their updated recommendations to the Province and Canada. 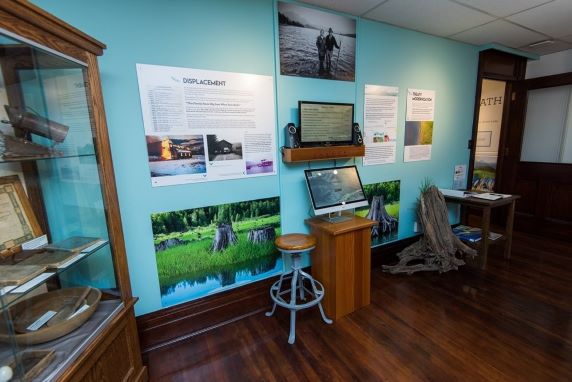 CBRAC visit to the Revelstoke Museum and its “Stories Beneath the Surface” exhibit on October 8, 2019

The Columbia Basin Regional Advisory Committee met for the 10th time last October for what members described as their best meeting yet.  The group spent one and a half days together in Revelstoke, B.C. discussing ecosystems, Indigenous perspectives on the Columbia River Treaty, efforts underway to address Treaty-related community interests, issues affecting Basin hydroelectric operations in 2019, and the Canada-U.S. Treaty negotiations.  Members of the Canadian negotiating team were part of these discussions, as they are at each meeting, to make sure they heard comments from, and could answer questions directly to, CBRAC.

One of the highlights for CBRAC was hearing from representatives of the three Columbia Basin Indigenous Nations that have been official observers at the Canada-U.S. negotiations since April 2019.  Speakers from the Ktunaxa, Secwepemc and Syilx/Okanagan Nations shared their views on the Treaty negotiations, describing the experience as positive, and noting how their involvement is meaningful for both Indigenous and non-Indigenous communities.  They highlighted that the work being done today is for past, present and future generations.  CBRAC expressed their appreciation to the speakers for sharing their thoughts and acknowledged how their participation in CBRAC greatly enhances the committee. 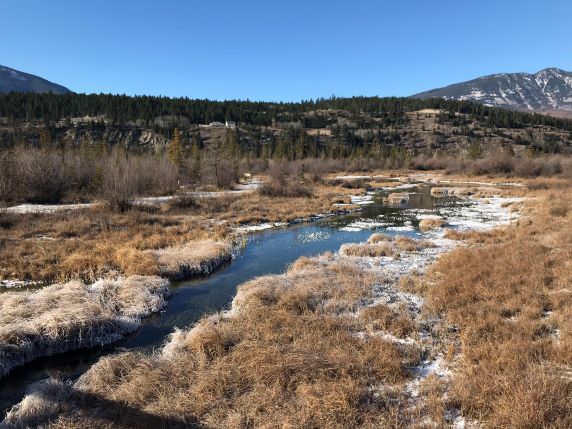 Columbia Basin Indigenous Nations are currently leading work that will inform the Canadian negotiating team’s discussions on how to address ecosystems in a modernized Treaty.  This involves developing goals and objectives for what a healthy ecosystem would look like, and ways to measure whether these goals and objectives are met. 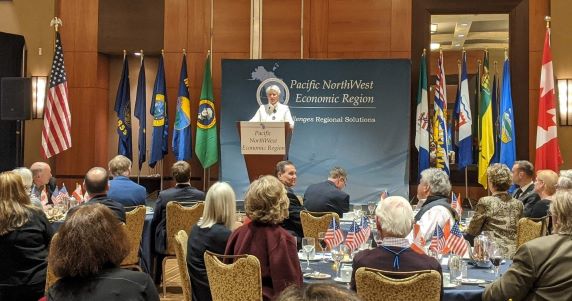 On Nov. 17, 2019, British Columbia’s Minister Responsible for the Columbia River Treaty, Katrine Conroy, gave the keynote speech at the Pacific NorthWest Economic Region’s (PNWER) Economic Leadership Forum in Seattle.  PNWER representatives were particularly interested to hear about the steps the B.C. government had been taking to inform and connect with local communities and citizens on the Columbia River Treaty.

Minister Conroy spoke to a large audience of politicians, economists, academics, planners and tech and industry representatives, from throughout the Pacific Northwest region.  She spoke in detail about how the B.C. government has engaged with Columbia Basin communities about the Treaty over the past decade, and why it is important to continue doing so.

Pointing to the long history of the Treaty and its impacts on Columbia Basin communities in B.C., Minister Conroy recalled how grassroots local efforts led to the establishment of the Columbia Basin Trust in the 1990s as a means to give Basin residents a share of the benefits created by the Treaty to enhance the social, economic and environmental well being of the Basin. 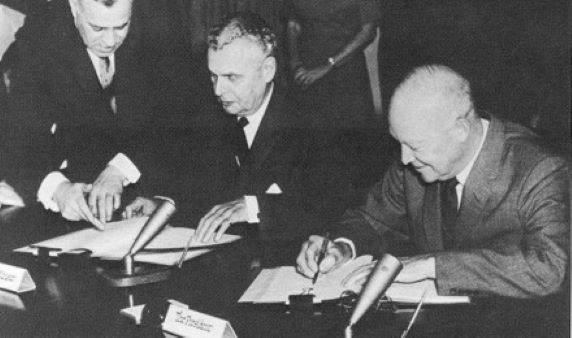 Treaty Fact: What is the Canadian Entitlement?

The original principle of the Columbia River Treaty is to create benefits for both Canada and the U.S. and share them equitably.  For Canada, this includes a share of the downstream power benefits, which is called the Canadian Entitlement.  Under the 1963 Canada-British Columbia Agreement, these benefits are owned by the Province of British Columbia.